The sports of trail running and mountain running often take us off the grid, to remote and undiscovered places. And many of us relish the escape from civilization and the primitive essence of running for hours in places untouched by the hands of time and devoid of modern comforts.

On the other hand, there is a unique aspect to the running culture that forms when a city has a mountain right at the center of it — as Cape Town, South Africa, has Table Mountain. The contemplative quality of the solitary long run in an isolated location is replaced with more opportunities for human connection, and runners are rewarded for their efforts on the climb with a bird’s eye view of their city stretched out before them.

One of the (by now the best-known) trail running groups to form around Cape Town is Tuesday Trails, headed up by Ultra-Trail Cape Town (UTCT) race director Stuart McConnachie. McConnachie first started the regular Tuesday group runs alongside Nick Bornman, his UTCT co-founder. He told iRunFar:

“Nick was based in Hong Kong and there was a large community there and he said, ‘Why isn’t there a community here?’ [At the start] it was just a group of mates who would join us every Tuesday evening and just run. It’s slowly gained momentum and popularity and it’s almost an institution now.”

The group stays going all year round, meeting at 6 pm each Tuesday, come rain or shine. McConnachie said, “Mid-summer is definitely our peak, I would say we have up to 200 runners then. On Tuesday night this week, which is midwinter … I would say we had around 150 people.”

The pack of runners is divided into five groups of varying paces and each group has a leader to show the way, and a sweeper at the back to ensure that no one is left behind. “You have that concertina effect, where the front stretches out and then the back catches up, and you always want to know where the back is.”

This time of year, the runs are in the dark, with runners following the light of their headtorches. “It looks quite crazy, the people in the city look up and they see the string of lights all over the mountain and they know something is going on.” 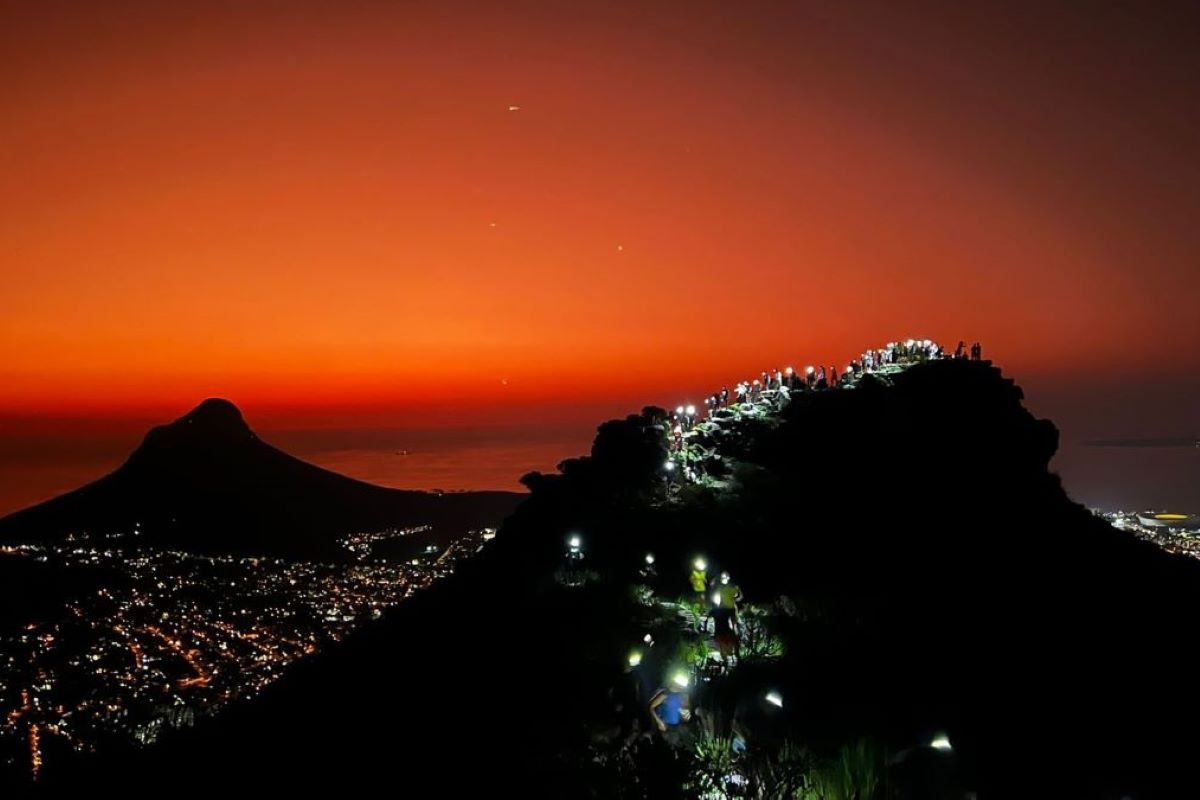 A trail of headtorches wind their way up Table Mountain on a midwinter Tuesday Trails run. Photo: Stuart McConnachie

The group meets in two different locations, alternating between the forest on the southern side of Table Mountain, and the north side of the mountain, which overlooks the city. When they meet and divide into their groups, each group will head in a different direction, ultimately following the whims of their leader on the night.

“That’s part of the dynamic, we switch all the time. And we don’t have set routes, the leaders decide where they want to go.”

McConnachie finds that mixing up the routes keeps people at the moment and engaged with the mountain and with their fellow runners, rather than watching the clock: “It adds to the dynamic as people are learning something about the mountain all the time — where to go , different trails. And it’s not too structured where you’re going on the same routes and then you start measuring your time.” 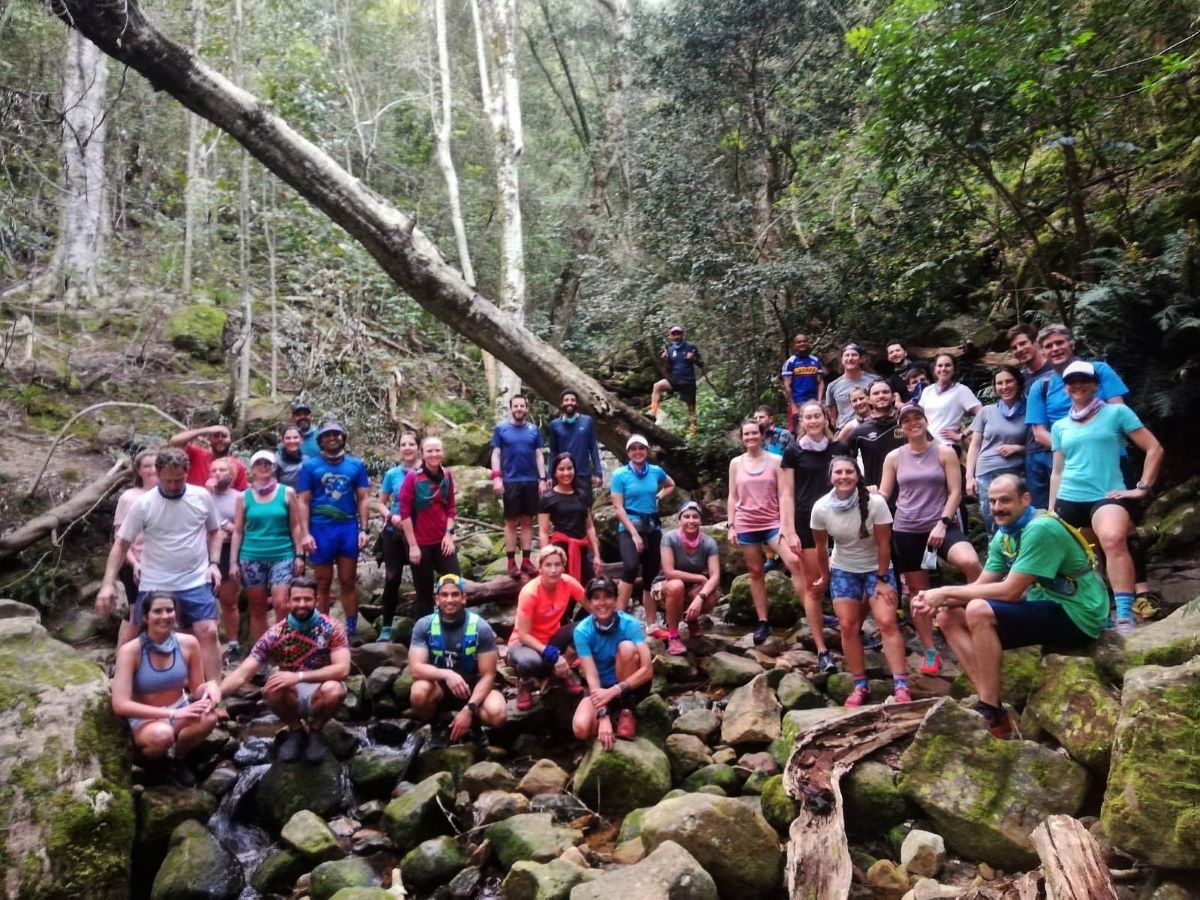 A summer’s evening in Newlands Forest, south of Table Mountain, which boasts a myriad of trails. Photo: Stuart McConnachie

Tuesday Trails is proud to have a ballpark 50/50 gender mix among its participants, and this was something McConnachie and the leaders were working toward for some time, “It took us a long time to get there. Especially the first years. There were a few [women] who ran with us [at the start]. Some others felt intimidated and didn’t want to run with guys. Then there were a couple of incidents on the mountain, in terms of safety, and that pushed things toward running with a group.

“I got help from some girlfriends of mine who said, ‘We want to run but the pace is too strong, so you’re going to need to start a new group.’ So, I said, ‘Fine, I’ll start a new group, but you have to come for six weeks.’ And then that helped to set the tone. Most of them are still involved. It’s great, it really is so positive to see the amount of female runners joining us, and also taking ownership.”

The group has a rotation of leaders and sweepers on hand, all of whom perform their role on a voluntary basis and McConnachie is always keeping an eye out for potential new leaders among the regular runners. 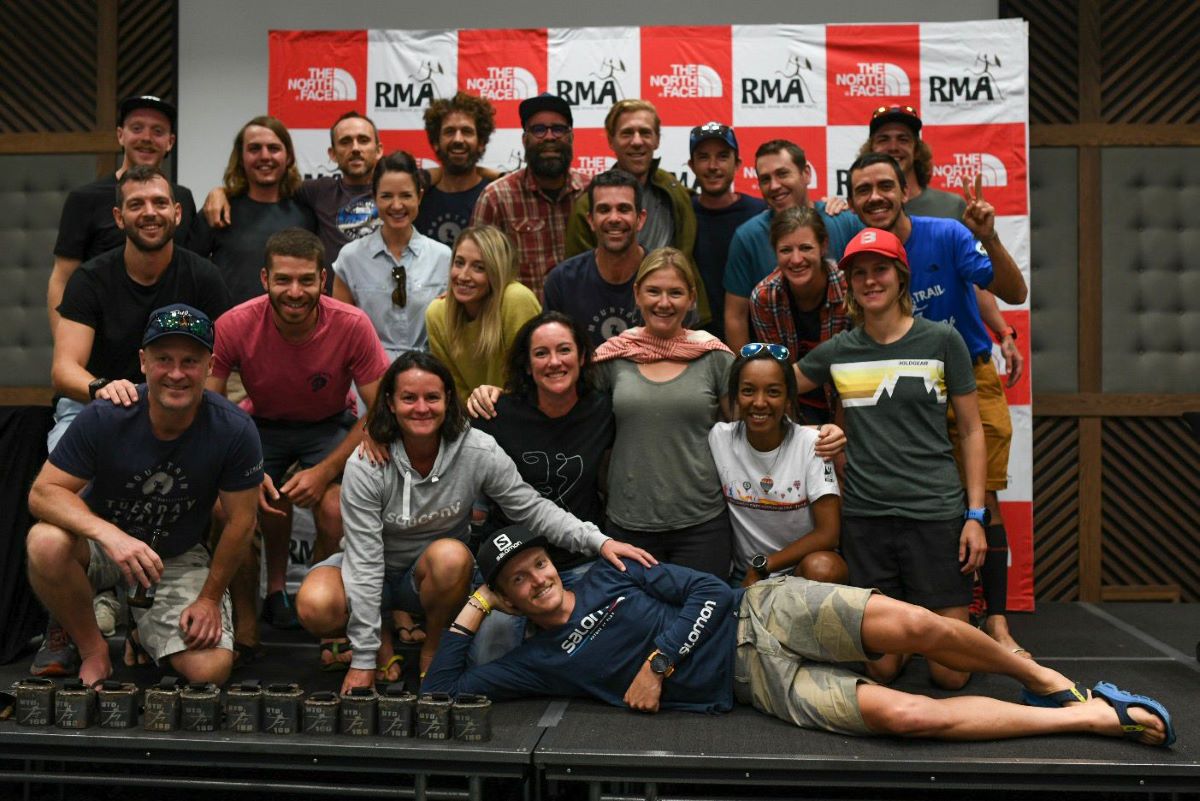 Tuesday Trails on tour, at Ultra-Trail Drakensberg (UTD), a race at the Maloti-Drakensberg World Heritage Site in South Africa. Group members regularly travel to races together and have made the trip to UTD an annual one. Photo: Stuart McConnachie

Shafeeqah Gordon was the perfect candidate for a run leader. As well as managing an outdoor store, she works as a mountain guide and knows the Table Mountain trails like the back of her hand. She joined Tuesday Trails in 2017, and in 2021, following some gentle persuasion, she graduated to run leader.

McConnachie said: “When I first said to her, ‘You should lead.’ She said, ‘What? No, I can’t!’ But now, she’s hard. She chases the group, she makes them run harder.”

Gordon told us, “I felt honored because there are no other female leaders in Tuesday Trails. I did find it a bit intimidating, but luckily I know the forest, I know the trails. I’m still kind of finding my way with it but we learn as we go.”

Depending on the time of year, Gordon’s group can have anywhere from 20 to 50 or more runners. As well as leading runs, she runs competitively at up to the marathon distance on the trails and regularly attends races with friends from Tuesday Trails.

She first started running with the group as a relative newbie to trails and said, “I didn’t know many people, I was just getting into trail running and most of the friends I’ve made in the sport have been through Tuesday Trails. … The Cape Town trail running community, it’s such a tight-knit group, everyone knows everyone, and at every trail race you are bound to know a few faces.” 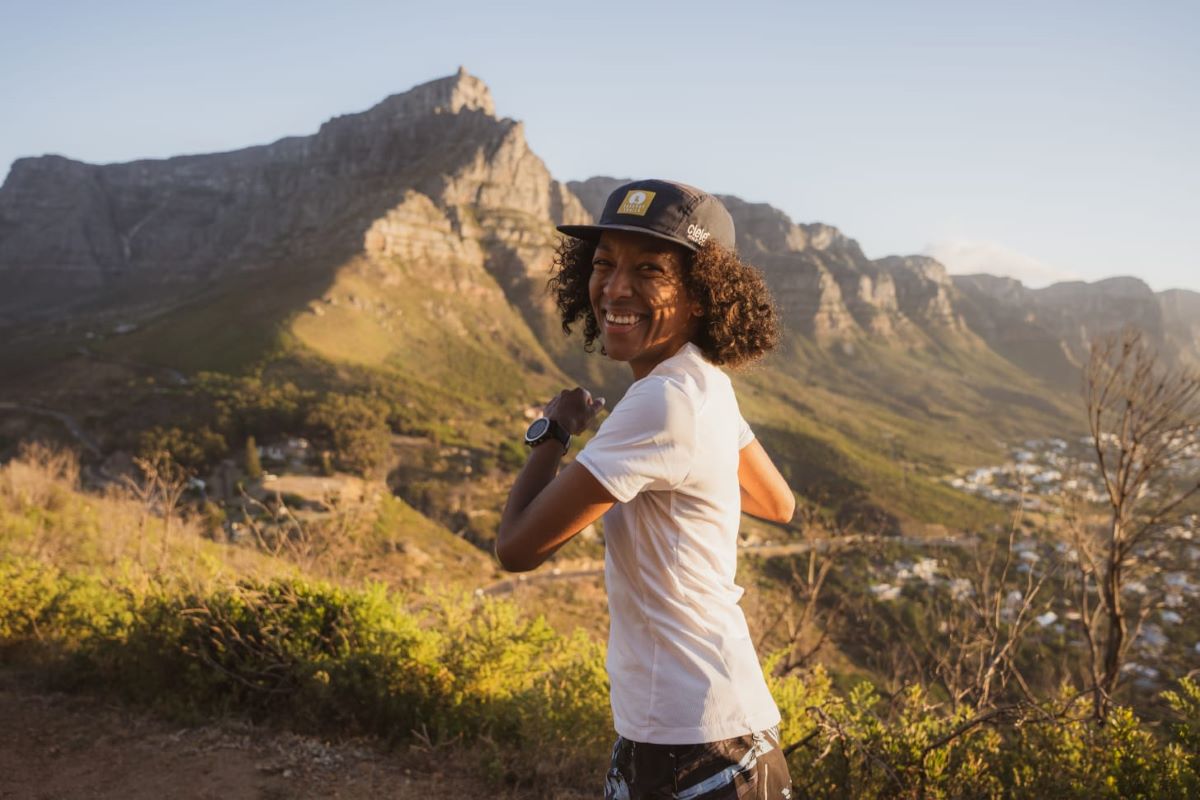 Sean Robson, a primary school teacher from Johannesburg who’s been living in Cape Town for 10 years, first joined Tuesday Trails after he took part in UTCT approximately five years ago. It was his first trail race after some time as a road runner. He stuck around the day after the event and was struck by the exciting and vibrant community that surrounded the race and Cape Town trail running generally. At the time, his friend Helene was a resident sweeper with Tuesday Trails and invited Robson to come along and help. He’s been sweeping ever since.

Robson spoke about the mix of people who take part, and the changing demographics in the group are probably reflective of the gradually changing demographics in the sport of trail running as a whole. He said “It used to be a — I’m reluctant to call myself middle aged — but it used to be an ‘older guy’ thing. It’s not like that anymore. There are twenty-somethings, men, women. It’s getting younger and people don’t do that ‘straight to the road’ thing anymore. A lot of people immediately start with trail running.” He continued, “We are seeing more and more runners of color come through. Probably not as quickly as we’d like but it’s happening.” 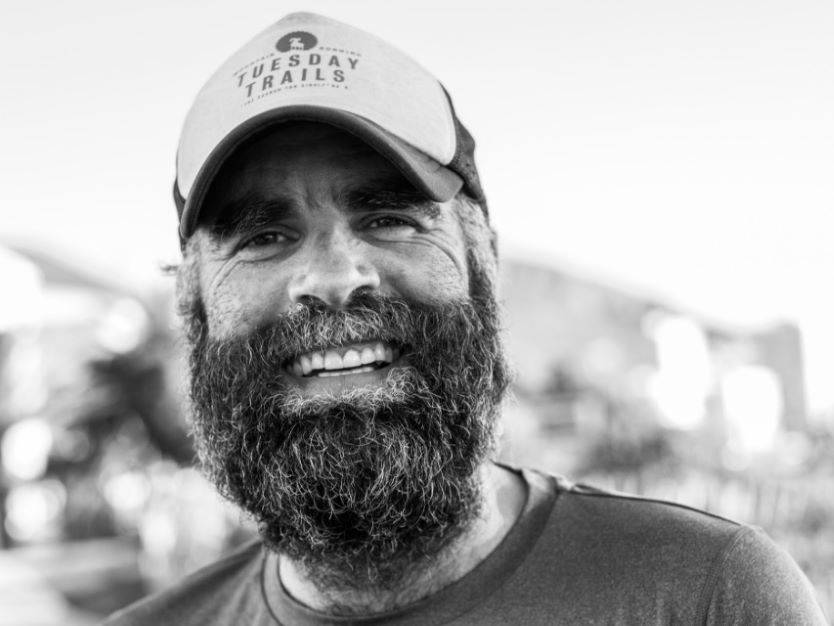 Becky Leighton, a freelance copywriter, attended Tuesday Trails for the first time a little over two years ago, answering an open invitation to join the group. She said: “I was very quickly struck by the community and just how inclusive it was, everyone was very welcoming.”

Leighton, an ultrarunner, quickly found others on Tuesday Trails with the same preference for longer distances and said, “It’s super cool to train with people who are on the same wavelength. … There are between 10 and 15 of us that go for longer runs together. It works really well and we encourage each other.” 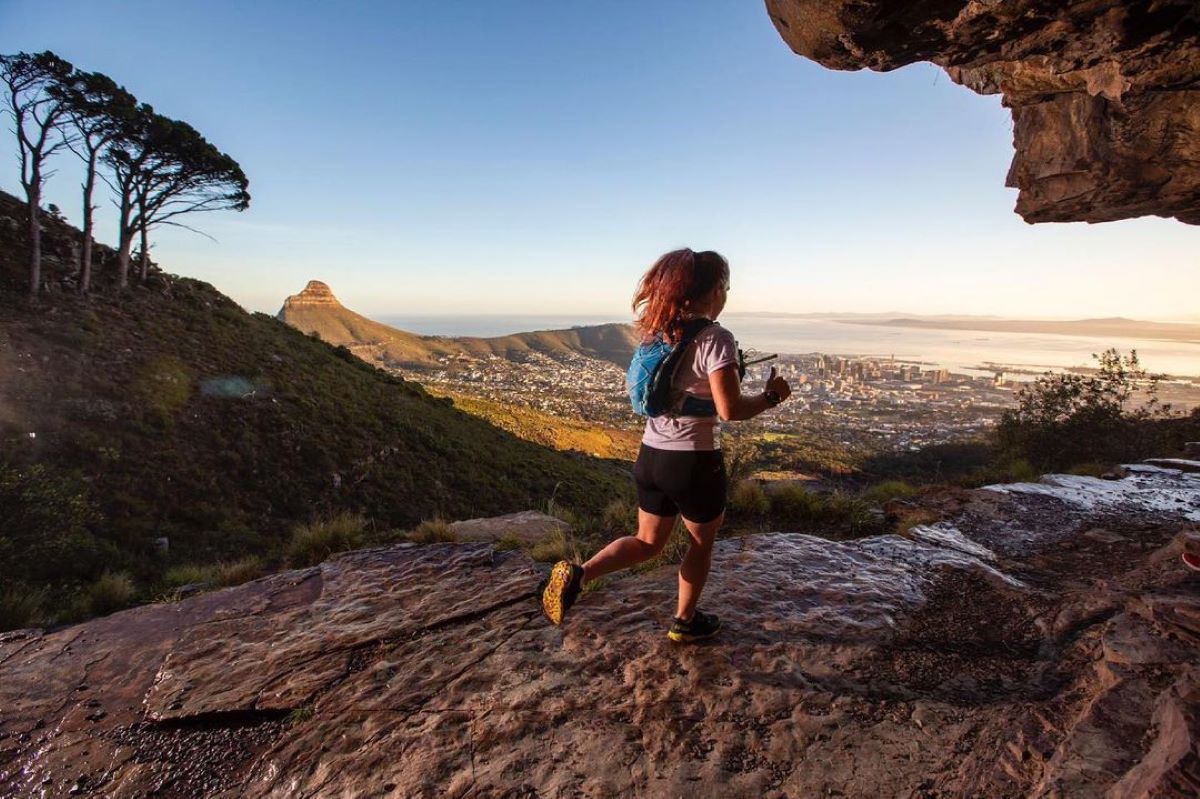 The busiest week of the year for the Tuesday Trails family is at the end of November, when elites and regular trail runners alike from all over the world descend on Cape Town for Ultra-Trail Cape Town. New faces appear on the Tuesday run, who have learned about the group either from social media or word-of-mouth reports, which have spread far and wide. The aid stations are all run by different Tuesday Trails groups, all proud to share their home city and mountains with the wider, global community of trail runners.

McConnachie said of the race, “UTCT is at the end of November. It’s a strange time, because it’s kind of spring. You can get a day where it’s 30 degrees Celsius, or you can get a day when it’s cold on the mountain and it’s raining, like it was last year. And it’s fine for the elites, we start in the morning and they were all finished by about 3 pm, but for the runners who went into the night, it was cold and wet and they were tested properly.”

The event, although best known for the 100-kilometer ultra, offers an array of distances. This year, there will be a 23k option and the 35k option, which has long been in place, works well as a crossover race for runners who may have done a road marathon or two and wish to dip their toes in the trail. 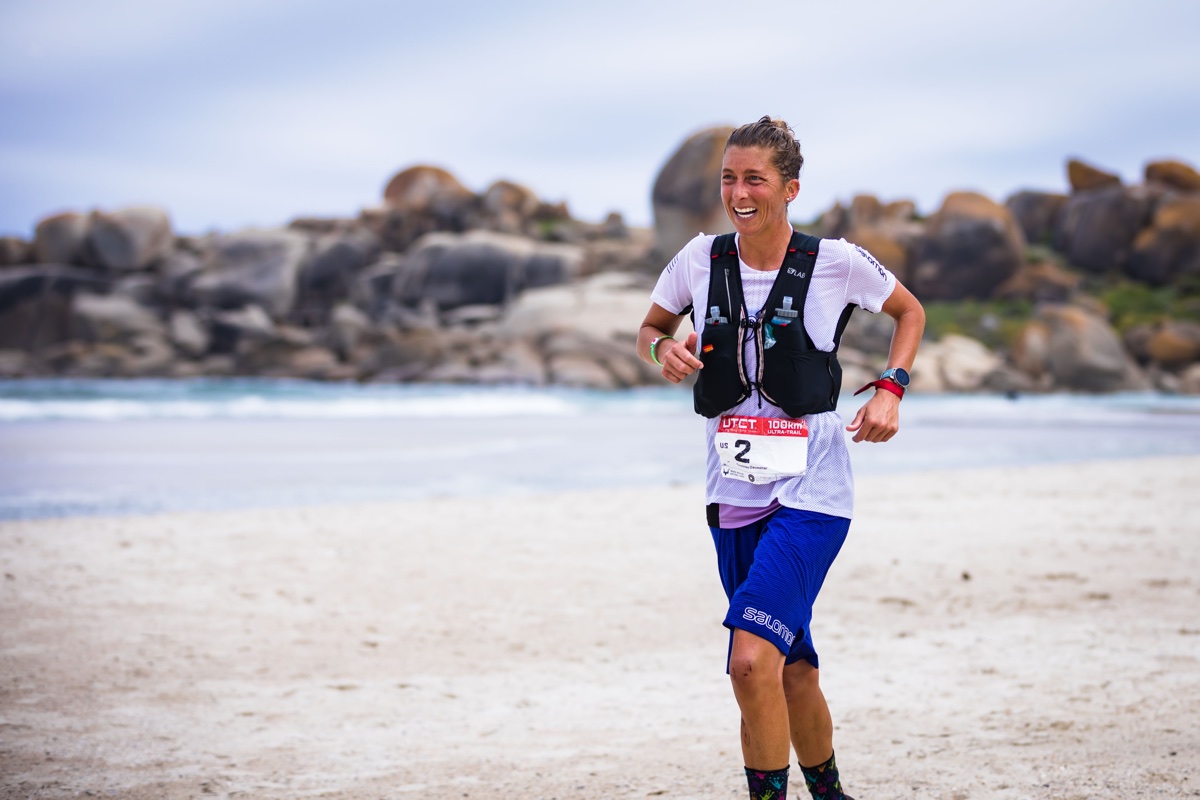 Another side to Tuesday Trails, which boosts the social element, is the post-run beers tradition. This allows a little more time for chats and planning and also allows the different pace groups to mingle together. Run leader Lance Wynne takes some credit for this tradition. He told us that at the end of a group run back in 2015, someone had said, “It’s 10 minutes to seven. We could do two more kilometers.” To which Lance replied, “Or, we could do the same amount of kilometers and have beers.” He continued light-heartedly, “So I brought beers for the first six weeks, as science tells us six weeks is how long it takes for habits to form.” 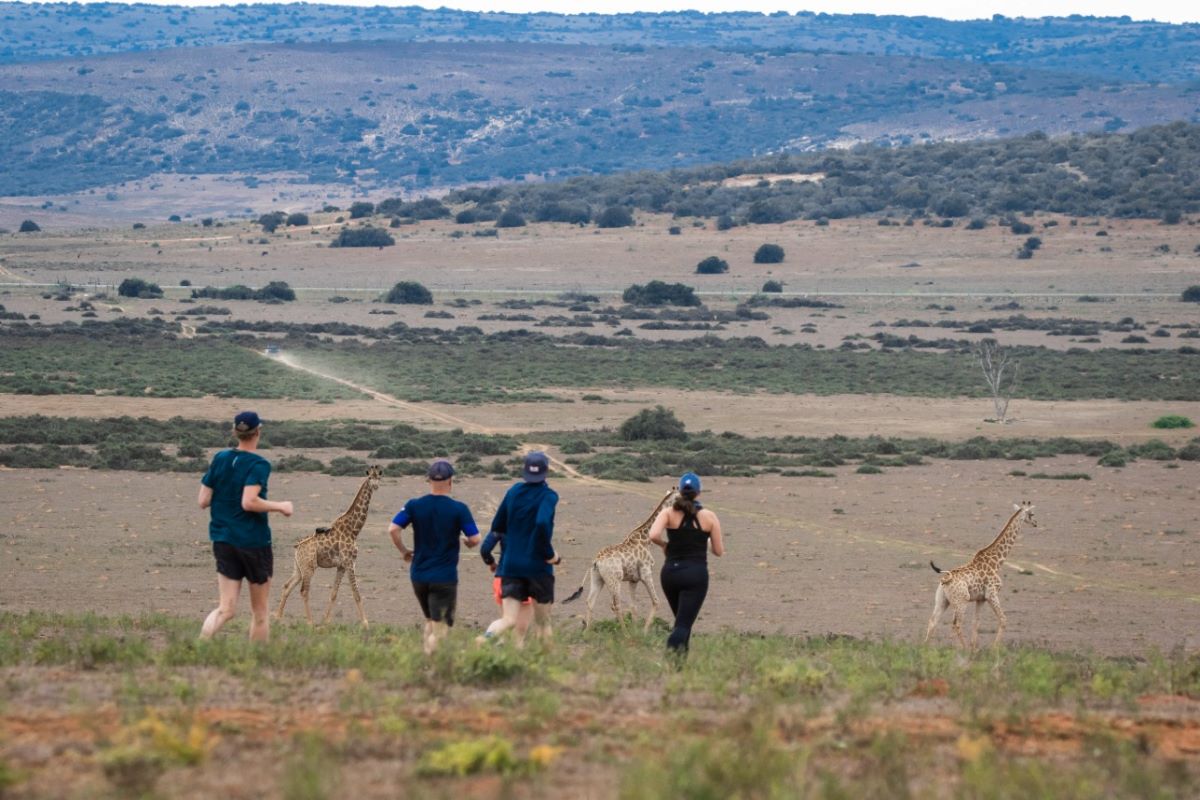 Nowadays, the beers are sponsored by a local brewer, Jack Black’s Brewing Company, and the runners pay for their beer with a donation that goes to a designated good cause. The initiative is called Pint for a Purpose, and one such good cause that’s been aided is the Be Moved Collective, of which Wynne is the founder. The collective is involved in conservation and restoration works to protect South Africa’s habitat and their habitats.

Trails funded a rhino project with the collective, which involved local students assisting with carrying out vital health checks and attaching trackers to the rhinos, which are used to monitor their health but also to act as a deterrent against poaching. 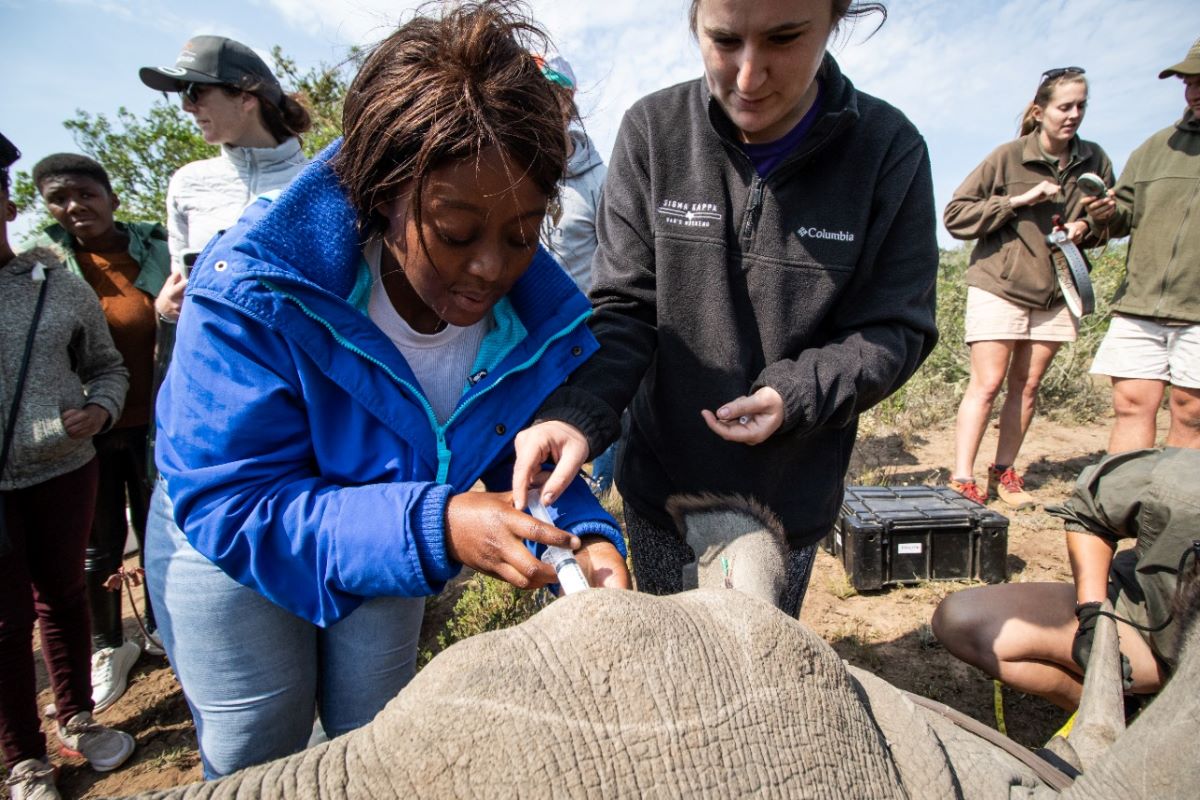 Volunteers and conservationists from Be Moved Collective administering a sedative to a rhino for the purpose of performing health checks and attaching a tracker. Photo courtesy of Lance Wynne.

Trail running communities in cities are certainly different. In a city of 4.6 million people, 200 gathering for a run can go quite unnoticed. But for those who will be joining in this shared experience next Tuesday, it will at least change their week, or at most open up a whole new world.