Cons: Harsh (as expected) for longer distances and heavier runners. Upper does not have much give (not necessarily a bad thing, but will not fit wide and voluminous feet).

Stack Height: No official stack height, but given the guidance below on the RP5 from World Athletics, the stack should be around 21mm. Given that the main redesign in the RP6 is in the upper, it is unlikely that the stack height has changed much, if at all from the RP5. The RP5 was advertised with a 10mm drop but at least in the RP6, the drop rode like a 3-5mm shoe.

Bryan is a road and trail runner living in Melbourne, Australia. He is a consistent sub 1:25 half marathoner and is presently chasing a sub 3-hour marathon. He is 176cm/ 5’9″ tall and weighs about 63kg / 140lbs. 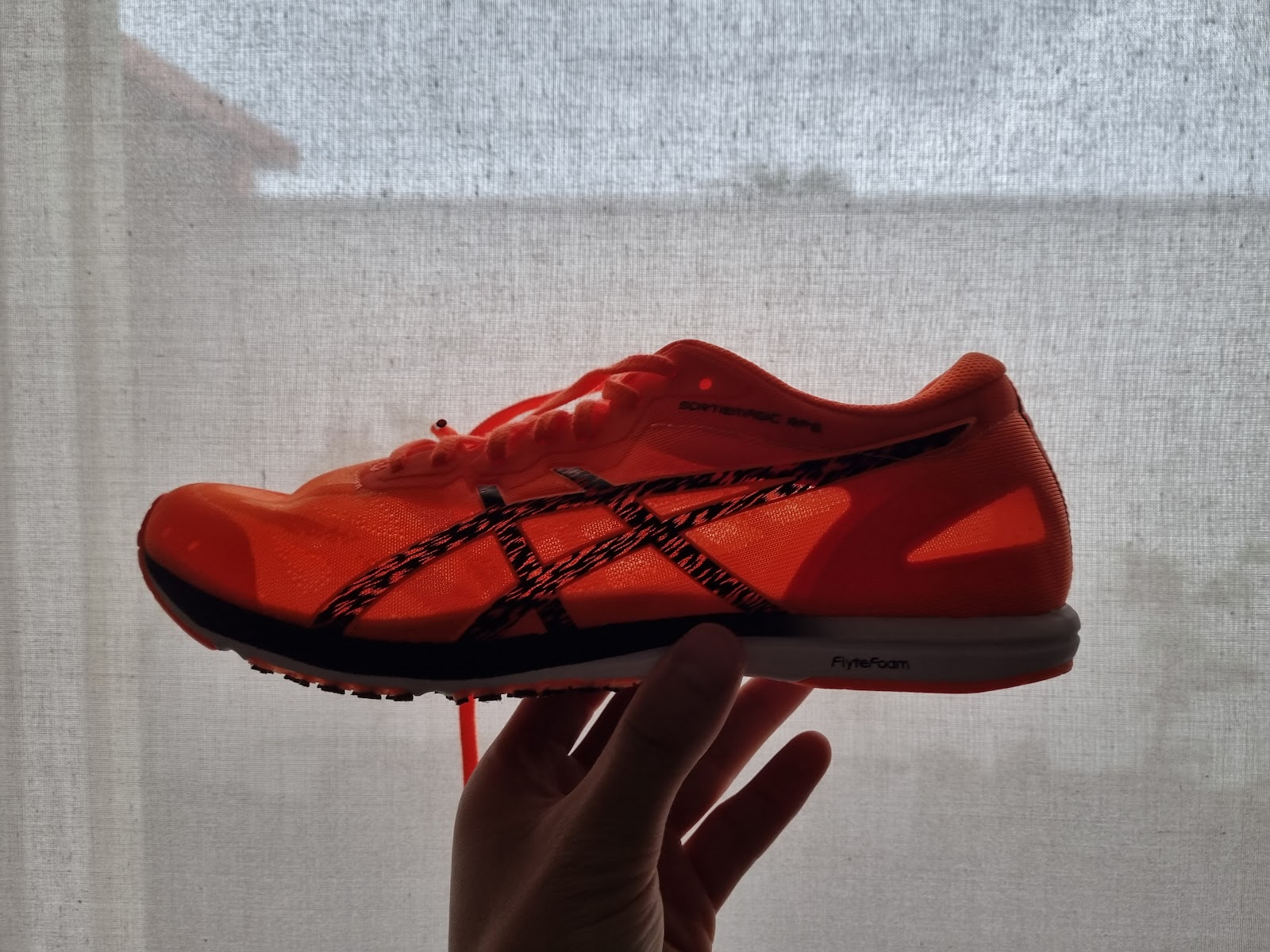 Bryan: The RP6 is exactly what I expected. By just holding the box, I knew this shoe was light! Asics even used a smaller than usual box to house these shoes.

Shoes on, the last I would consider to be on the narrower side, although it was a snug but perfect race fit for me. Note that the shoes are unisex and possibly is a C width. It is true to size for me, length and width-wise, however I fit fine in narrow shoes eg Salomon and pre-plated/rods Adidas Adios and Takumi Sens.

The upper has seen a redesign from the RP4 and RP5, which featured a more traditional double layered mesh upper with suede overlays. The upper in the RP6 utilizes an ultra-thin synthetic mesh that’s virtually see-through (as in the image above), with minimal overlays (or underlays to be precise) in the toe box and heel cup with the Asics ‘Tiger Stripes’ overlays Providing the lateral and medial side of the upper with some structure. There is even a cut-out in the heel cup, presumably for weight saving.

After a few tempo efforts at Parkrun and track sessions, I can say with confidence that this is one of the best uppers I’ve worn as it’s pliable, very breathable and despite being race snug, had the right amount of give. I almost wish the Metaspeed variants used it. 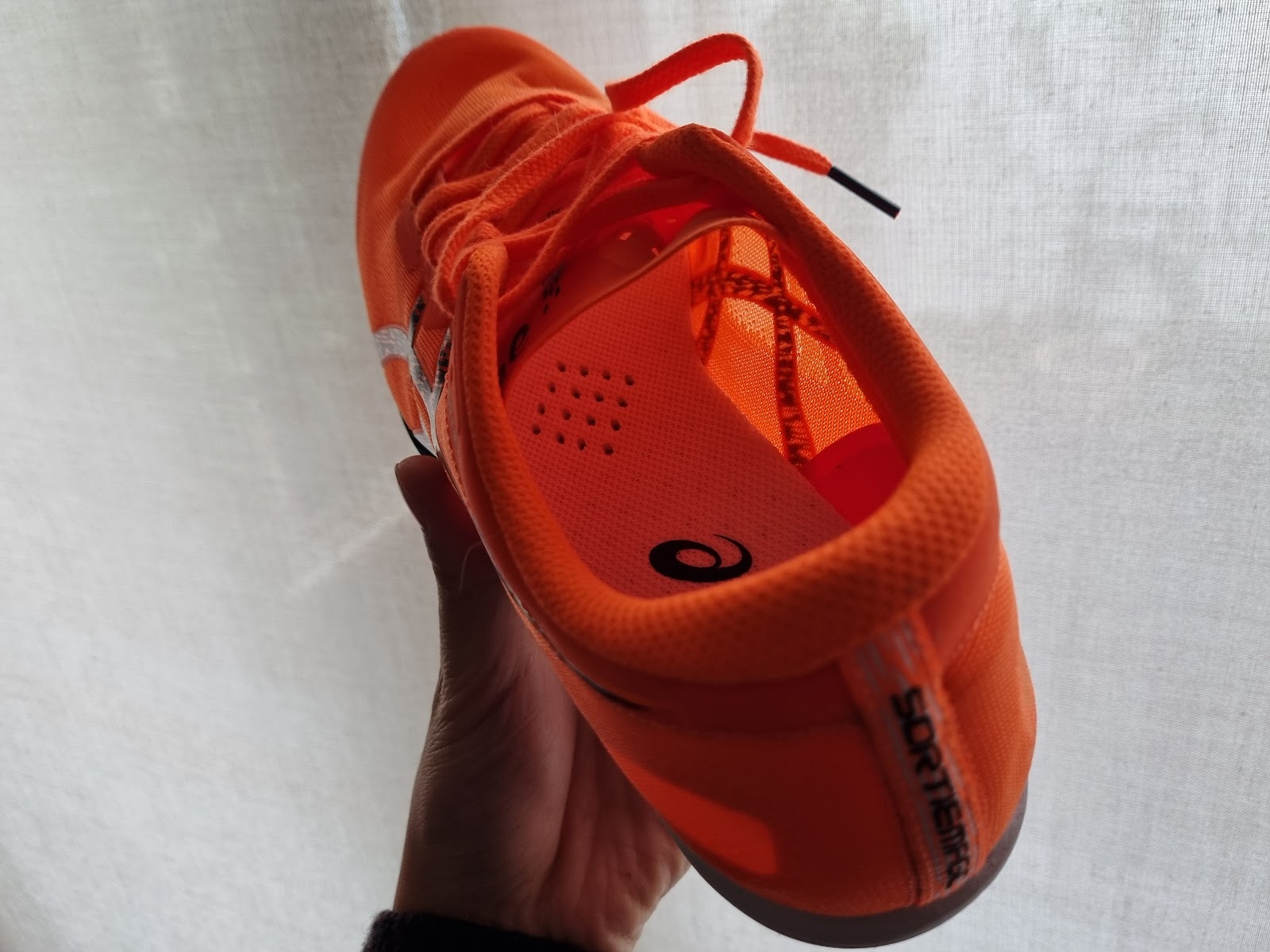 Bryan: The RP6 features a thin bed of Flytefoam Propel, a remixed EVA foam, as compared to spEVA in the RP4 and RP5 which was touted to be 20% bouncier than standard EVA. The midsole used is nothing special here, and essentially works as a means to an end – to get you to the finish line where comfort nor protection is not a priority.

It’s an interesting comparison to the Reebok Floatride Run Fast Pro (and v2) which uses a Pebax midsole in its construction. The Pebax Floatride rides livelier, but I feel that the relevance of Pebax is somewhat diminished when incorporated into a racing flat, where one could say that it is intended for the runner to generate the power and rebound. The Run Fast Pro is simple in its mid- and outsole construction, with no torsional plate/shank. Whilst both shoes are incredibly light racing flats, the ride outcome is very different. The RP6 is a lot more structured, partially due to the firmer FF Propel foam, and the Run Fast Pro more ‘free-spirited’ with full flex and the responsiveness of Pebax. More on this in the following sections.

As in the image above, the midsole is also punctured by two drainage ports in the mid-and forefoot. Whilst not tested, it’s a pretty cool feature, and probably adds some flex to the ride.

Lastly, let’s quickly talk about the drop. As mentioned, there is no official drop, although in the RP4, it was called out at 10mm. By feel, the RP6 rides like a 3-5mm, and feels a little more forgiving on the calves than the Reebok, which has a 3mm drop. 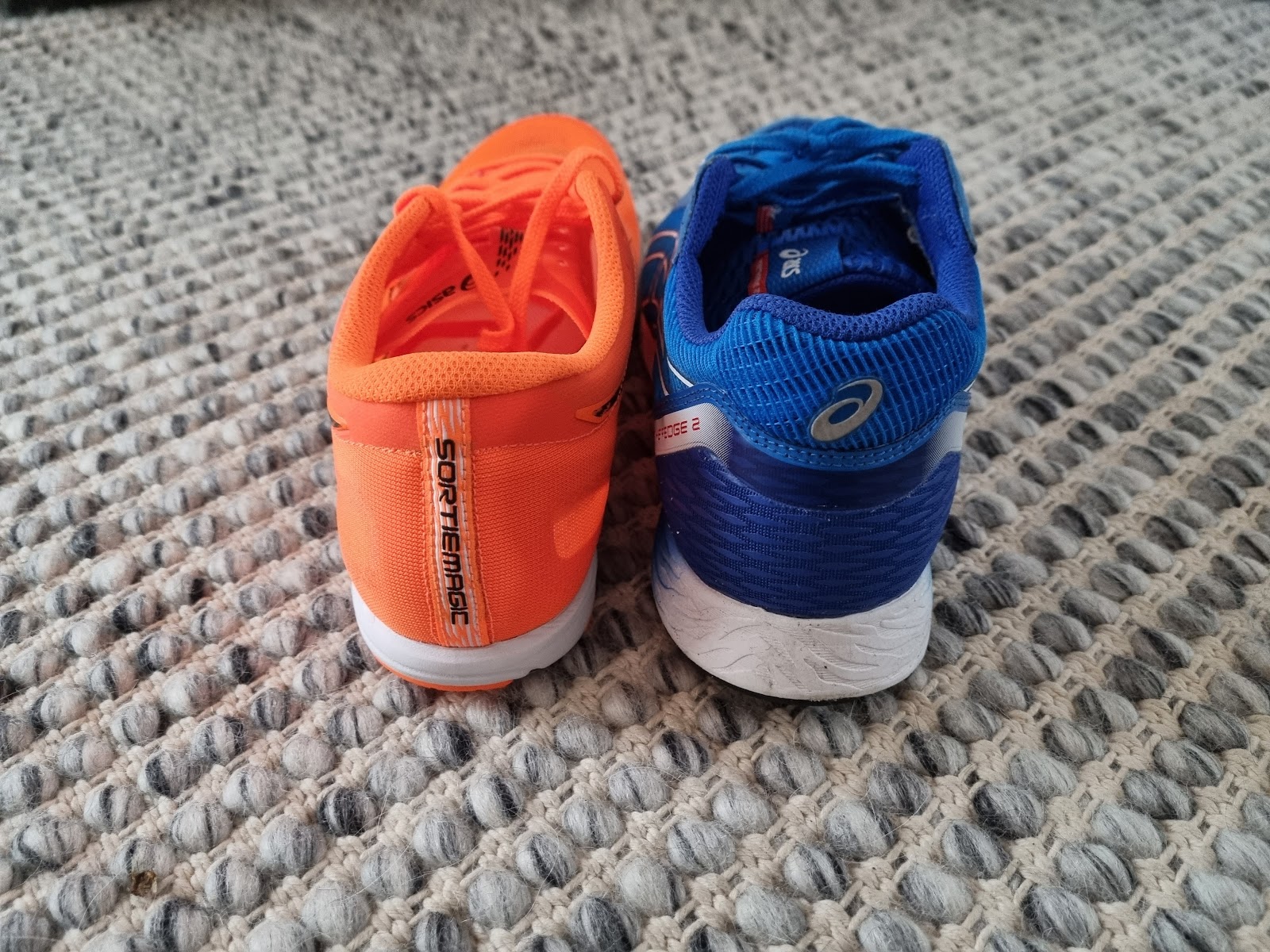 Standing next to its big brother, the Tartheredge 2 (27mm stack) 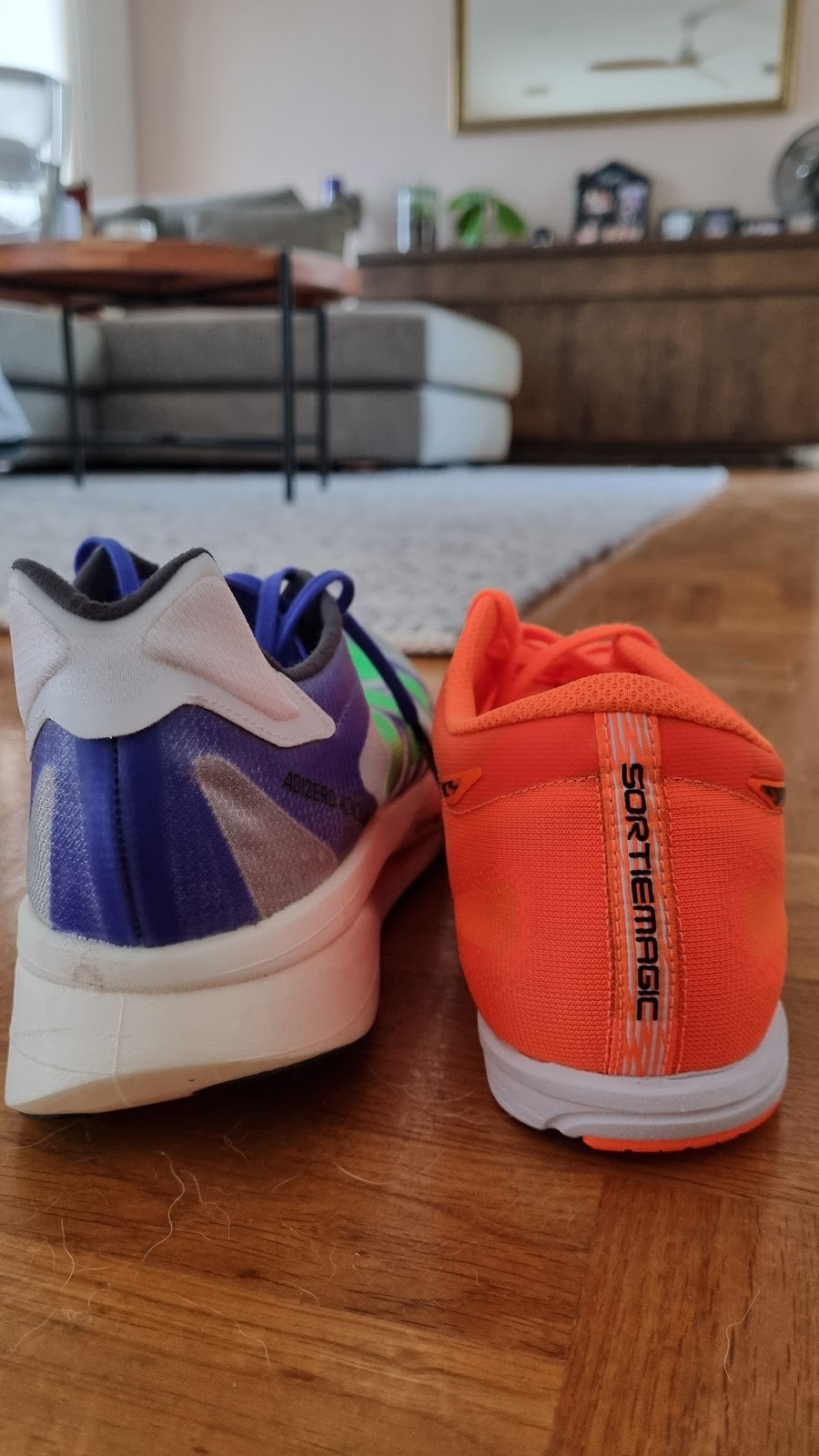 The difference between maximal and minimal. Adios Pro 2 (39.5mm stack) on the left. 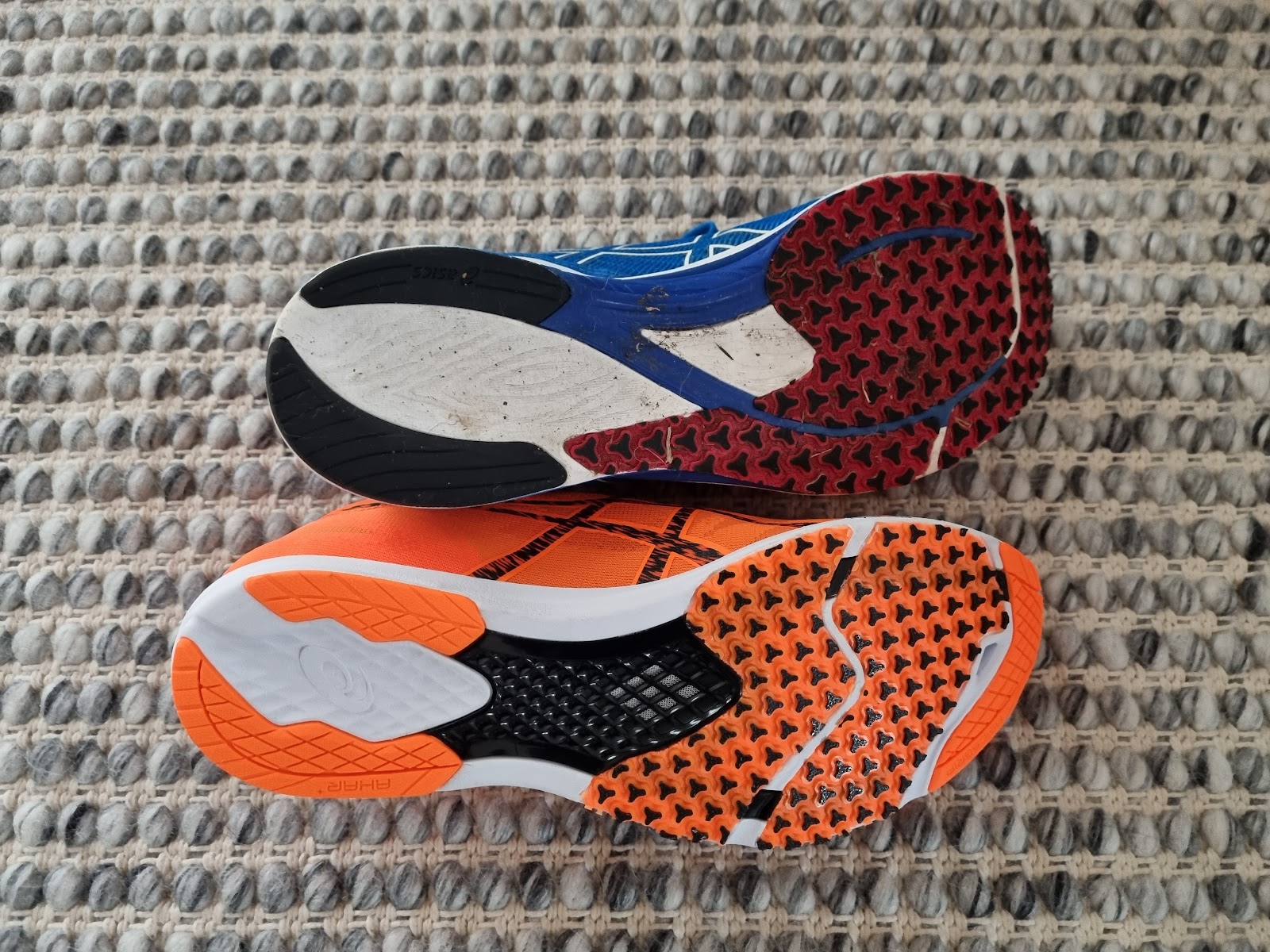 Bryan: This is where the magic happens and I think is the most unique feature of the RP6. AHAR+ rubber in the extreme forefoot, and rear; waffle in the forefoot with two lateral cutouts for flex (as compared to one cutout in the Tartherdge 2), and a wide torsional shank in the midfoot that splits into a Y-shape in the forefoot, reminiscent of the Metaracer’s carbon plate and more recently , Skechers Go Run Razor Excess 2. As mentioned in the previous section, the added stability is noticed, and the Y-shaped extension of the shank works like guardrails to provide that stability when landing and transitioning.

The waffle used is unique to Asics, and very similar to the DSP used in the older Adidas Takumi Sens (version 5 and before, see below image). It is extremely effective traction wise, and is superior to the Reebok (see image below) and the variant used in the Adidas Adizero Pro (like the Reebok, a series of rubber nubs). Running at my local Parkrun, whose course is of hard packed gravel, I’ve never experienced this amount of grip and stability in any of the other shoes I’ve worn. On durability, I have no concerns about the AHAR+ rubber used but I suspect, as with most waffle outsoles, that it will be the first part to go. After about 20-30km, the wear on the micro-wear pattern on each waffle is noticeable. 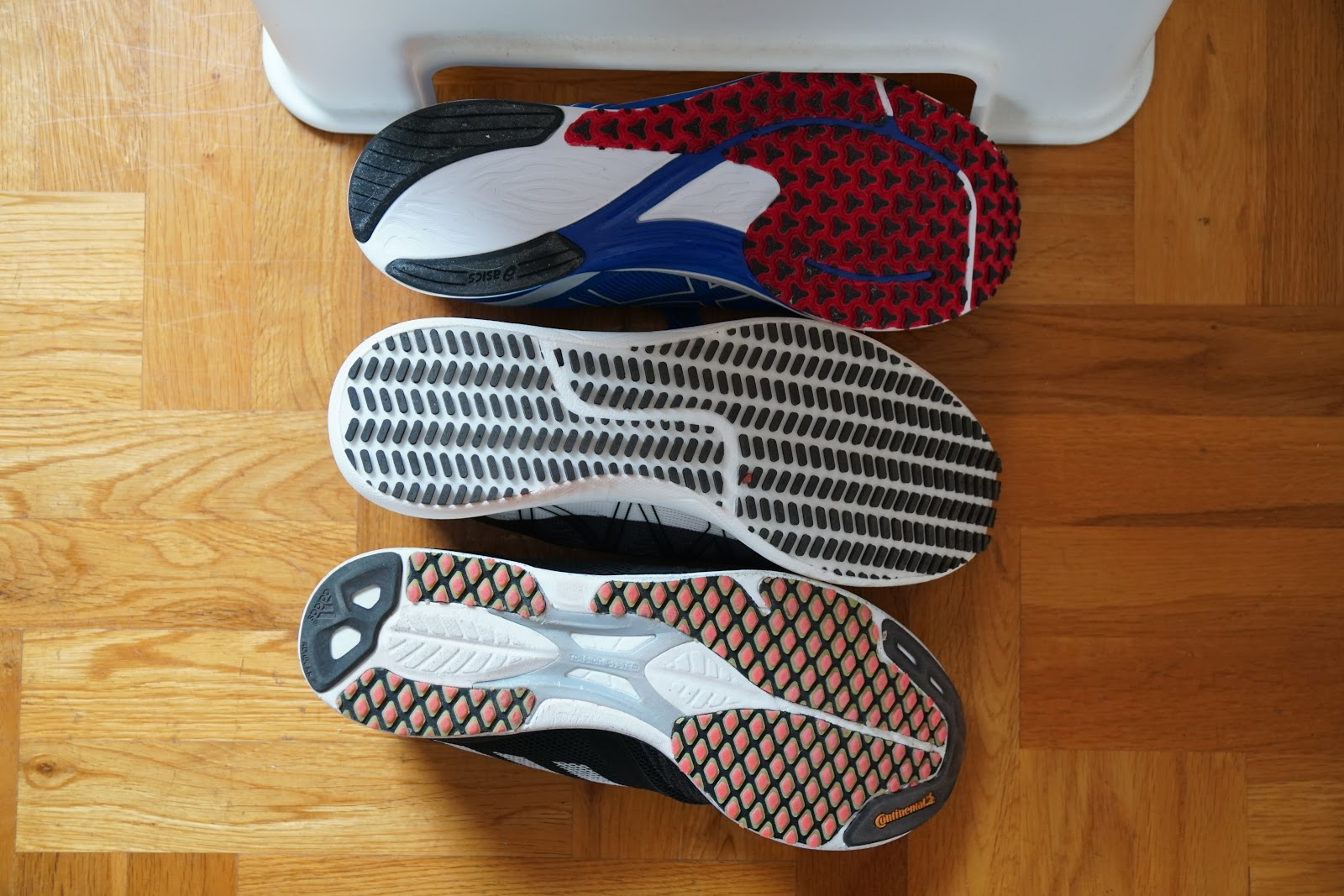 Bryan: Of the flats I have worn, the ride in the RP6 is quite possibly my favourite, edging out the Takumi Sen 5 slightly, likely due to the FF Propel foam used instead of standard EVA in the Takumi. The ride is stable, and the Y-shaped extension of the torsional shank gives the shoe a little pop when toe-ing off. The responsiveness in the forefoot, and ample flex in the midsole, provide for a smooth transition of stride.

Notwithstanding the unknown drop and the very minimal stack height, my feet did not feel as beaten up when running in other flats with a more forgiving drop eg Nike Zoom Streak Flyknit (8mm drop) and adidas Takumi Sen 5 (9mm drop). It is on par with the Reebok Run Fast Pro v2 (3mm drop) only due to its stability features and not the midsole foam. The torsional shank and extension, and grip make up for the ‘standard issue’ FF Propel foam, whereas the Reebok uses its superior Pebax based Floatride foam, but is unstructured in its construction and ride. Not surprisingly, it rides similar to its bigger sibling, the Tartheredge 2, with a little less protection, but with greater flex.

Bryan: The RP6 supersedes the Reebok as my favorite flat so far, especially as it retails at close to half the price of the Reebok. As with any flat, the main concern is its versatility and durability. My rating below reflects this, although as Yuki Kawauchi has proven (and to a small extent, myself as a lightweight runner) flats can be extremely versatile and be used for a marathon.

Personally, I would use this shoe for up to a 10km road race, and probably lean towards a plated super shoe for a half. I have dedicated the RP6 as my Parkrun (5km) tempo shoe, and my feet surprisingly feel fresh after each effort. For most, I would imagine that these shoes would be reserved for track / speed sessions and race day for 5k and under.

My only recommendation, and more of a thought, is I wonder how the RP6 would run if the FF Propel foam was swapped out with something bouncier or more responsive eg FF Blast (But not FF Blast+ which is too soft). Add a little more stack (between what it is now and the Tartheredge 2) and it could be more palatable for more runners and for longer distances. I’ll keep dreaming!

The Adios has lost its purpose in today’s market, with the high-stacked Adios Pro 1/2/3 becoming the brand’s flagship marathon shoe. However, the Adios 3 is a fiercely versatile shoe that is capable of a quick mile to the marathon, all in a minimal package. The Adios serves a different purpose to the Sortiemagic RP6. The much heavier Adios with bouncier Boost has substantially more heel cushion and is less capable at shorter distances.

Like the Adios 3, the Takumi Sen 3 and 5 (there was no v4) has been completely redesigned in the Takumi Sen 7 and now 8, which is higher stacked and features carbon rods. With this redesign, thereTakumi Sen 5 is the last of Adidas’ racing flats. The construction of the Sen 5 is very similar to the Sortiemagic RP6, with a thin bed of EVA (as compared to FF Propel EVA blend in the RP6), waffle forefoot outsole and a torsional shank. As mentioned above, the difference in ride is felt with the more modern and responsive FF Propel foam used. The upper in the RP6 is also superior, with the RP4 and RP5 resembling the Sen 3 and 5 more, as they were racing flats in that era. Sounds long ago, but that was only pre-2018.

Not really a comparison, but a juxtaposition of shoes. The Pro 2 is ‘rodded’ and ‘plated’ with a superfoam and a high stacked profile. It is ultra bouncy and responsive, and is almost a running aid to the runner. I would use the Pro 2 for half marathons and above, but for winding courses and shorter distances, the RP6 might be the better shoe.

I feel like my review has almost been an exclusive comparison of the RFP v2 and the Sortiemagic RP6, so I’ll keep it short. They are so similar, yet so different. The RFP v2 rides with more flex and overall has a more inspiring ride, but the RP6 is more focused and stable. Each is just about equally good (great actually) as the other, but it does get to my mind that the RFP v2 is a whole ounce (28g) lighter.

The bigger sibling to the RP6. Rides similar, but in a more protective and less flexible package, and is definitely far more versatile than the RP6. It is also 2oz (60g) heavier. As an everyday option, the Tartheredge might be too racy for most, but as a racing / speed option, you have the RP6 which I would class as more fit for purpose. I only use the Tartheredge 2 these days for less intense speed sessions, or when I am a little tired and need a more forgiving option but then I also have the Metaspeed…

I think it’s worth comparing the RP6 to the mostly forgotten Metaracer, Asics’ first attempt at the plated super shoe. Similar to the plastic torsional Y-shaped shank, the Metaracer utilized a double wish-bone carbon plate that was located near to the outsole. The main difference of course is that it is carbon plated, higher stacked, and has an aggressive metarocker. The only similarity is that the rides are both firm, but otherwise they are very different shoes. Whilst I enjoyed running in the Metaracer, it does not have a place in my rotation as it’s neither a flat, nor an every day option nor a super-shoe.

The Asics shoe that has stolen the racing limelight from the Sortiemagic lineup. Like the Adios Pro 2, these shoes couldn’t be any more different. As a side note, I wished that the upper and forefoot waffle in the RP6 could be slapped onto the Metaspeed’s midsole. But at present, each shoe has its purpose. Both are great for speed sessions, but I feel that the RP6 is a better trainer as it gives my calves a good workout ala strength training, to then be able to utilize the Metaspeed to its full extent on race day.